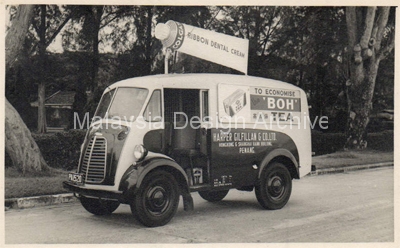 A 1940s postcard of Harper Gilfillan Van. In April 1867, three enterprising gentlemen decided to leave their positions as managers of the Borneo Company Limited to start up on their own. By pooling their experience and expertise Samuel Gilfillan, William Adamson and H.W Wood set up a company, Gilfillan, Wood & Co in Singapore. In 1886 Archie Charles Harper arrived in Selangor as its first European trader. He set up a company called A.C. Harper & Co. and his original business was that of an importer of horse fodder. He retired in 1907 but his business continued and between 1930 and 1935 A.C Harper & Co. and the interest of the Gilfillan group were merged. Thus was created the group known as Harper Gilfillan and those activities have spread form the original base in Singapore throughout Malaysia and Brunei.