Crafts of the Jah Het

The Jah Het are part of the Orang Asli, the indigenous minorities of Peninsular Malaysia. The Orang Asli constitute less than 1% of the Malaysian population.

The Jah Het are inland peoples residing mainly within the Krau river valley near Jerantut, Pahang. The Jah Het are grouped under the Senoi sub-ethnic group and only number 5,104 (Jheoa 2003).

Once swiddeners, many now own agricultural smallholdings, run small businesses or are wage workers. Despite the steady development of their traditional lands, the Jah Het have managed to retain much of their adat (culture, social mores and traditions) as well as their intangible heritage including their distinct languages, myth and stories, songs, dances and handicrafts.

The Jah Het still produce many utilitarian and agrarian crafts, especially in communities which still practice swiddening (shifting cultivation). They also make and use fishing implements such as tanggok, shrimping baskets and saring dibang fishtraps for use in freshwater swamps and rivers.

Basketry is practiced by both men and women, but only women weave cultivated screwpine leaves (pandanus sp.) into mats and pouches; weavers now prefer the durability and colour of fibres recycled from plastic mats. Increasingly rare crafts include blau blowpipes and musical instruments.

Woodcarving, renown in the 1970s, has only recently been revived and there are less than 10 active carvers – all men, residing in Kg. Sg. Kol and Kg. Pian. Most carved sculptures depicting illness – causing spirits (bes) but a few carvers also depict jah or people in everyday scenes.

This agrarian village of less than 100 families is a forty minute drive from the town of Temerloh in Pahang. Located within the Krau river valley and fronting the Krau Game Reserve, many villagers still practice rice swiddening while others gather non-timber forest products for sale. However the majority work in their own rubber and cocoa small-holdings.

Craft production is still and uncertain supplementary source of income; artisans prefer to work in their smallholdings. There are a few skilled basketmakers in this village but only one active woodcarver. Visitors are welcome to visit the homes of the artisans, with prior arrangements.

The following are some Jah Het crafts marketed by Gerai OA: 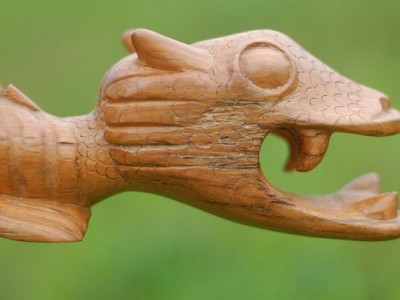 jah wooden sculptures
These are contemporary vignettes of nostalgic village scenes involving jah (people) or and/or wildlife. Made from merbau, rengas or any other available wood, some carvers also depict local myths and legends.

hibong rattan back baskets
These durable close-weave back baskets are woven from split seq rattan and are used to haul paddy from their swiddens. There is a rare lidded form known as hibong dungun which is footed basket and used indoors.

nyiru winnowers
Woven from langkap and cucoh palm rachis fibres and secured with rattan, these durable winnowers are still used to separate grain from the chaff after rice has been pounded in a wooden rice mortar.

tonggok shrimping basket
A beautiful semi-spherical basket made from retieng (donnax sp.) fibres secured from rattan. These are used to sieve small fish and shrimp from freshwater swamps or shallow rivers, especially during the dry season.