The Temiar are the second largest group within the Orang Asli, the indigenous minorities of Peninsular Malaysia. The Orang Asli constitute less than 1% of the Malaysian population.

The Temiar are uplanders, residing mainly in northern Perak and Southwestern Kelantan. The Temiar are grouped under the Senoi sub-ethnic group and number 25,725 (Jheoa 2003).

Many Temiar living near forested areas are swiddeners while others own agricultural smallholdings, run small businesses or are wage workers. Despite increased development of their traditional lands, the Temiar have managed to retain much of their adat (cultures, social mores & traditions) and intangible heritage including their distinct language, myth and stories, songs and dances, and handicrafts.

The Temiar still produce many utilitarian and ceremonial crafts, especially in communities which still practice swiddening (shifting cultivation). Basketry is a common craft still practiced by both men and women, using rattan, palm or other fibres. However only women weave either wild or cultivated screwpine (pandanus spp.) into mats, baskets and pouches.

Those residing near forested areas also produce and use traditional hunting implements including bamboo blowpipes (blau). Various animal and fish traps are still made and used to supplement their diets.

Traditional musical instruments such as genggong (mouth harp) or si-oi mouth flutes are still made and played on request. Ornamental leaf weavings are made from palm fronds, for ceremonies or celebrations.

This settlement scheme of four villages and 600 inhabitants is less than two hours drive from the town of Gua Musang in Kelantan. Located next to Sg. Perias and surrounded by a forest reserve, this village is only accessible via a laterite logging road and competant 4WD vehicles.

SSN, a community-based initiative was established here in 2007. Craft production and eco-tourism are uncertain supplementary income; most villagers now own rubber smallholdings. Visitors are welcome to visit the artisans and nearby Gua Peralong prehistoric site, while white-water rafting, jungle trekking and home stays are possible with advance notice.

The following are some Temiar crafts marketed by Gerai OA:

apoq pandanus pouches
These hold-all pouches housed tobacco or betel-quid. No calibrated stripping knives are used to process the pandanus into fine strips. Some weavers also decorate the pouch with elaborate openwork handles.

aleg pandanus backbasket
The simple tubular backbaskets are woven from seke’ (pandanus sp.) strips; there is a rare version made from chodg barkstrips. Both have chodg barkstrap handles. Smaller indoor use storage baskets are known as ranog. 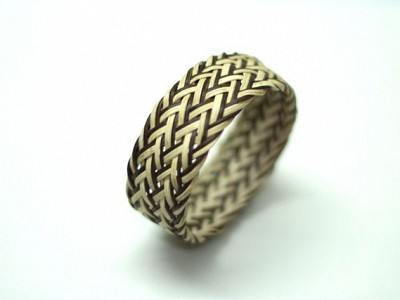 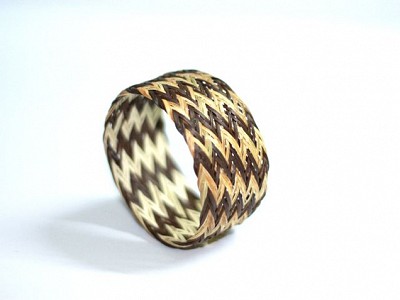 chenos bangles and rings
Tali rattan strips are interwoven as reinforcement rings for blowpipes and axes. Larger, broader versions are now made into finger rings or bangles, with additional colour from different types of rattan or fern fibre (tebaq). 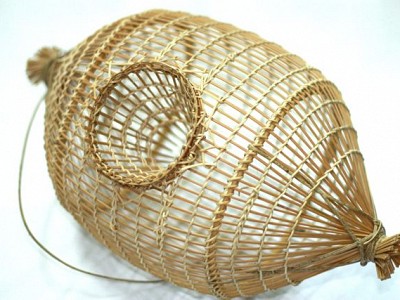 bubu fishtraps
Made from thin strips of beltop palm rachis fibres secured with tali rattan, these scaled down fish trap have various forms for different water conditions: bubu pacik is rotund while bubu wag has a “waisted” form.

temtom fungus fibre belts
Made by plaiting temtom, a stringy jungle fungus, these black belts are said to possess medicinal properties. Also known as ben-nyer after the plaiting technique, it is said to help alleviate moderate backache.