Leaflet: No.103, Smash the Communist Party 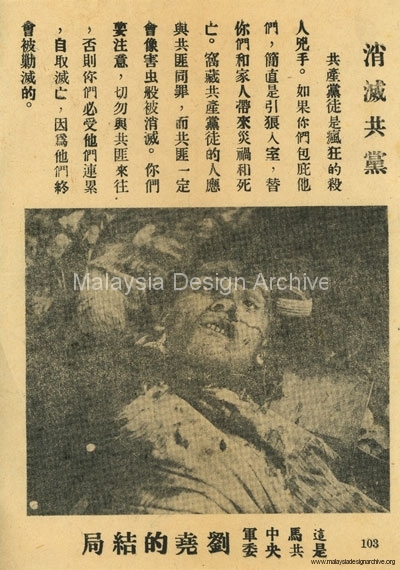 Most theories on psychological warfare state clearly that depictions of dead or disfigured soldiers are contraindicated since it tends to make the enemy think that the producer of the propaganda is gloating. However, despite the warnings, Western nations often show such photographs believing that it frightens the enemy and destroys his morale. Leaflet 103 is a case in point. It shows a dead Communist soldier with eyes wide open dead on the ground. The text is:

Communists are ruthless murderers. If you shelter them, you will be bringing the wolf into your home, causing disaster and death to yourself and family. Those who harbor assassins must expect to be treated like Communists, who will be exterminated like vermin. Have nothing to do with Communists, lest you get caught in their web and endanger your own life. They certainly will die.

This was the fate of Lau Yew, member of the Central Military Committee of the Malayan Communist Party.

(Source of text – image courtesy of Lee Richards of psywar.org)