Leaflet: No 256 Now is the time to save yourself! 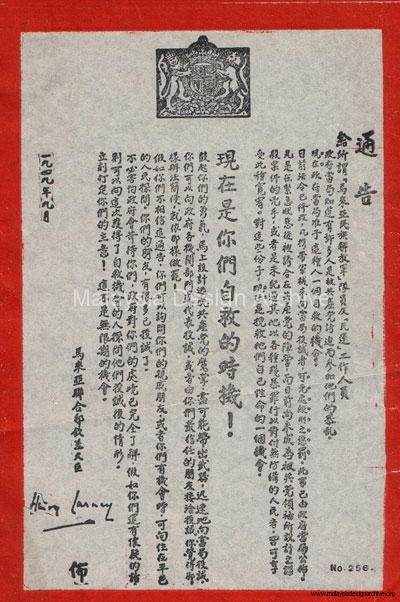 Leaflet 256 is a very early all-text amnesty pass from September 1949 on white paper with a red border. It has been reported that of 207 terrorists who surrendered between September and December 1949, 48 were as a direct result of reading leaflet 256. The text below the British Seal is:

To team members of the so called “Malayan Races Liberation Army” and the staff of “Min Yuen.”

Government Officials are aware that many people were coerced and deceived into joining the Communist Party’s illegal actions.

Now, those Government Officials are giving these same people a chance to save themselves.

The law has been amended so that whoever surrenders to the officials right now and brings in their weapons will be spared from prosecution.

This amendment has been announced by the Government authority.

To these people, now is a chance to rescue their life.

NOW IS THE TIME TO SAVE YOURSELF!

Muster up your courage. Plan immediately to escape from the Devil’s clutches. If possible, bring out your weapons. Immediately surrender to the authorities. You can go to any Government department, institution, or representative to surrender. If you feel that it’s easier to meet with your most trusted friend to surrender, then do it that way! If you do not believe this notice, you can ask your friends and relatives. Or if you have the chance, you can enquire from the people situated in the free areas. Most of your friends have already surrendered. Don’t be afraid that the government will treat you harshly. The government fully understands your situation. If you still have any doubt, you can enquire about the treatment received after surrender from the people that have already taken the opportunity to save themselves. Please make up your mind immediately! This opportunity will not be offered indefinitely.

(Source of text is here and image source is courtesy of Benjamin Seet of psywar.org)