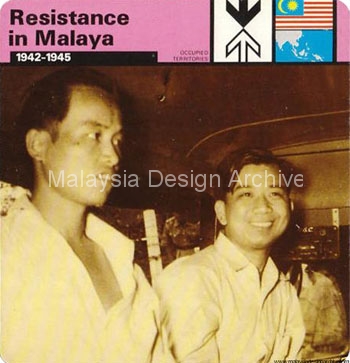 A card from a large set that was released by Edito-Service S.A. in 1977 (also known as Atlas Editions Cards) and was available through mail subscription only. The card back is filled with a complete write-up about the subject featured on the front. This is card # 62-08 in the set and this card is part of the “Occupied Territories Subset”.

The story on the back is titled:  Underground work of the MPAJA. The caption below is found at the bottom of the card back and explains the picture shown on the card front:

Illustration: Chin Peng (right) leader of the Malayan Resistance during the war.