Hungry ghost month is upon us. In many parts of town, especially areas with a predominantly Chinese population, one finds burnt offerings by the side of the road or a makeshift stage set up where the effigy of the King of Hell and his entourage made out of coloured paper would rule over the proceeding month. All of these to honor the anonymous dead. Those who died silently, tragically, suddenly or simply lonely. 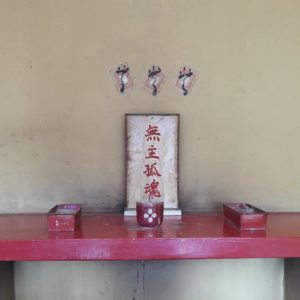 Then there are also more permanent shrines built in nondescript locations to honor the anonymous dead, like this one located somewhere on the northern banks of Klang. Situated within a tiny zinc-roofed brick house temple is a tablet that reads 無主孤魂, the orphaned spirit without a master. There are no other decorations in the built structure, its walls are spare and grimy. No one remembers how long this has been here.

Given that the temple was erected for the many seamen who died lonely and unmarried, it primarily tells the story of the migration of the Hokkien community from Kinmen island to Klang and of those who lost their lives to the stormy sea in search for a new life abroad. Their stories are not entirely lost to this sleepy village. For it is at this temple they remained in the collective but dim memory of older villagers, whose upwardly mobile children have since moved out of the village.
.
Yet, the tablet remains. Unadorned, unassuming, just a rectangular block that gives witness to a people whose hardships made them into a collective. For ultimately the tablet is not only about honoring one particular community’s dead. It also becomes a shrine for each and every seamen who died lonely, all those pendatangs who built this city. Old and new. Klang, commonly regarded as KL’s unglamourous counterpart, is also her archive who remembers those without names and therefore not commemorated by national history.