The space age gripped the imagination of everyone in Malaya, including the Tamil community. This leaflet from Singapore’s National Library exhibition on theatre history last year promoted Vinvelli Veeran (The Man from Outer Space), a tamil sci-fi theatre extravaganza about visiting spacemen by SS Sarma. It was staged at the Victoria Theatre in Singapore around 1966. 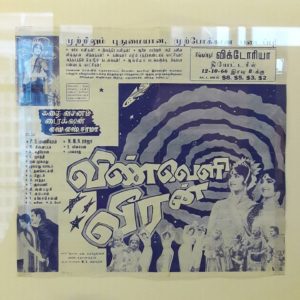 In the Hindu tradition, interdimensional cosmic deities were the stuff of religious myth and piety. Yet a new graphic sensibility emerged by the sixties, exemplified by the huge spiralling vortex in the central image that referenced American sci-fi pulp visuals of the sixties. Note also a tiny traveling spaceship on the upper left corner of the vortex.

1966. This was a year after Singapore left Malaysia, suddenly the world that the new island nation-state inhabited was filled with threats of alien invasion, reflecting an anxiety towards foreign domination of Singapore. But one could still make time for a theatrical revue. And not just on any street corner, but the Victoria Theatre, one of the few colonial inheritance where large scale performances and exhibitions could be mounted back in the sixties. What better way than to dance the fear away.